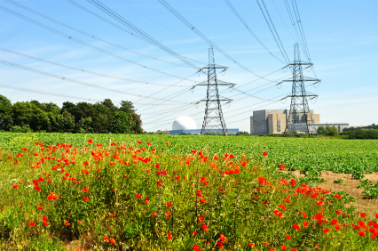 Nuclear power is expected to play an important part in helping to make sure Britain has the reliable, low carbon energy supplies it needs for the future.

Currently, around 21 per cent of Britain's electricity supply is provided by nuclear power from 15 reactors. View a list of all of the nuclear power stations in the UK at the World Nuclear Association’s website.

There are plans for around a quarter of Britain's energy to be supplied from nuclear plants by 2025. As the older nuclear plants are retired, new ones will be needed to replace them. In June 2011, eight sites across Britain were chosen as locations for new nuclear stations:

The eight sites are:

EDF Energy is working on plans to build four new European Pressurized Reactors. Two will be built at Hinkley Point and two at Sizewell, supplying around 10 million homes with energy by 2025. The first of these new plants is expected to be running by the mid 2020's.

EDF Energy is working with Centrica. Centrica have invested in EDF Energy's existing plants and in the planning for new power stations.

Following the tsunami in Japan and the tragic events that followed, the safety of nuclear power stations has become even more of a high priority for the government.

Dr. Mike Weightman and his colleagues in the Office for Nuclear Regulation, were tasked by the Government to look at lessons that Britain could learn from the disaster.

His interim report, published in May 2011, concluded that the direct causes of the nuclear accident in Japan were far beyond the most extreme events the UK could expect to experience. He therefore found that there was no reason to stop the operation of nuclear power plants or other nuclear facilities in the UK. However, learning from such events would be vital in making sure that the UK’s nuclear safety arrangements were robust.