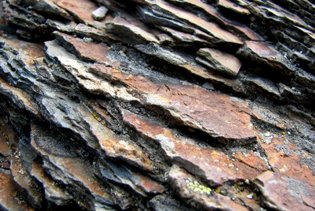 Shale gas is a natural gas trapped inside rock formations deep underground. Pumping water, chemicals and sand into a drilled well at high pressure releases the gas. This is called hydraulic fracturing or fracking.

It has been estimated that shale gas supplies may add significantly to the world’s recoverable gas resources. In the US large deposits of recoverable shale gas have led to reductions in the price of natural gas.

The use of shale gas has increased in the US over the last decade. A survey by the US Energy Information Administration estimates the amount of shale gas that can extracted in 32 countries.

In 2012 a gas exploration company reported that there could be more than 200 trillion cubic feet of untapped gas sitting underneath Lancashire. Exploitation of this resource could have use in the UK's energy mix, providing up to 5,600 jobs, including 1,700 in the local area, at the peak of production.

A report published by the British Geological Survey in July 2012 estimated that there may be up to 1,300 trillion cubic feet of gas, significantly more than previously thought, but only a small percentage will be recoverable.

There are concerns that fracking causes the release of more greenhouse gas emissions than conventional gas.

An American study published in the Proceedings of the National Academy of Sciences (PNAS) suggests that the drilling adds to the risk of nearby drinking water becoming contaminated with methane.

In April 2012, the Department of Energy and Climate Change (DECC) published recommendations that fracking should include an initial stage of monitoring and checking to safeguard against the risk of seismic tremors.