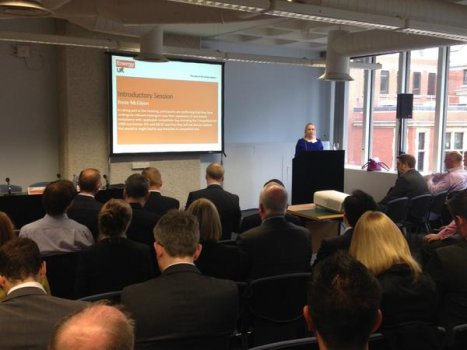 Written by Rosie McGlynn on 25 September 2014

The UK’s roll-out of Smart Meters has faced a variety of challenges. One of the largest has been delivering the 100% Home Area Network (HAN) coverage that Government and industry are committed to.  Energy UK has been coordinating a project that is taking the programme much closer to providing this.

Energy UK identified that the 2.4GHz bandwidth at which many of the Smart devices send data was the problem. This is due to some buildings not being suited to devices communicating on this bandwidth. The alternative is to use dual band approach using 2.4GHz and 868MHz.   The need to reassure participants in the programme that devices operating at 2.4GHz and 868MHz were capable of resolving this problem was apparent, despite there being evidence already proving this capability.

Energy UK hosted an event at the Queen Elizabeth II conference centre on 17 September to help resolve these issues. With demonstrations from technology providers, meter manufacturers, and silicon vendors and a Q&A panel discussion with a fifth organisation, outstanding technical questions and issues were answered. Discussions covered key issues like how 868MHz coverage will be beneficial to vulnerable customers, the economic benefits brought by the project and the wider Smart Meter programme.

Government leadership, Energy UK’s coordination, industry’s support and manufacturers’ expertise have come together to deal with the issue. The project has significantly narrowed the gap and will set an international benchmark.   It has proven that a collaborative approach is not only workable, but it’s also successful.