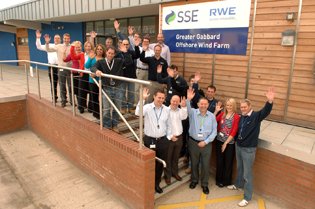 The Greater Gabbard Wind Farm project has invested around £1.5 million in the development of an operations and maintenance base at the old Waveney Fish Market in Lowestoft. Around 100 jobs will be created at the base, with some employees already in place. Local fishermen are transporting men and equipment out to the wind farm during construction.

Steve Rose, Offshore Wind Operations Manager said: "The Greater Gabbard Offshore Wind Farm is a big project and we needed a first class operations base in order to carry out the job efficiently and effectively. The new development at Lowestoft helps us deliver this and is also providing local jobs which are much needed in the region."