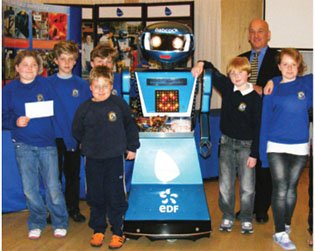 Selvin Roberts, EDF Energy Technical and Safety Manager at Torness, said: "The engineering challenge was a fantastic way to teach young children how different forms of energy are sourced and generated, and encouraged them to look at the environment in which they live, in a different way. We were delighted to have supported this year's challenge and have enjoyed regular contact with the schools as the children work their way through the tasks."