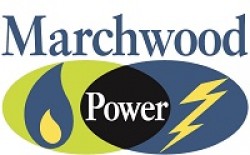 Marchwood Power Limited owns and operates a £380million natural gas-fired combined cycle (CCGT) power station on Marchwood Industrial Park. Marchwood Power Station began commercial generating electricity in December 2009 and was officially opened the following month. The station generates approximately 895MW of electricity for the national grid, enough to supply nearly one million homes. This is equivalent to the needs of Southampton, the New Forest and Winchester.
The facility uses the latest technology to ensure maximum energy efficiency and minimal impact on the environment. It is currently one of the most efficient power stations in the UK. Impacts on the environment and nearby communities are strictly controlled.